A while back I got some little sample skeins of yarn with my pre-ordered copy of A Stitch in Time Vol. 2. I think it’s about time to review them!

This is Excelana 4-ply, a reproduction ‘vintage’ yarn brand owned by Susan Crawford, which complements the many, many reproduced vintage knitting patterns she has under her belt. 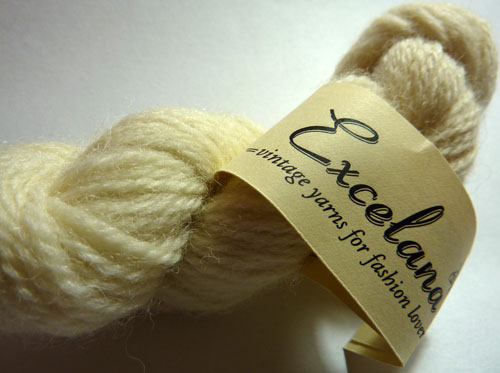 It is 100% British wool, spun from the fleece of the Exmoor Blueface, which is a cross between the Exmoor Horn and the Bluefaced Leicester. It’s extremely soft and light for pure wool and it has a slightly silky sheen to boot. The long fibres make it smooth and also very tough; almost impossible to break with bare hands.  If I didn’t know better I would assume some fancier fibres had been mixed in. Also, it smells pleasingly sheepy!

I knitted it up on the recommended 3mm needles. Excelana behaved itself very well during the knitting. It sticks to itself like most pure wools, but it’s smoothness makes it flow off the fingers nicely. Having recently done a whole lot of knitting with Shetland wool, I quickly noticed how warm Excelana is by comparison. The resulting fabric is quite plump at a gauge of 28st/36rws per 4in. A pretty versatile thickness; something for both spring and autumn and indoor winterwear.

Here’s the swatch before and after blocking. Quite a difference isn’t it? That ‘before’ picture was the flattest I could get it to lie! 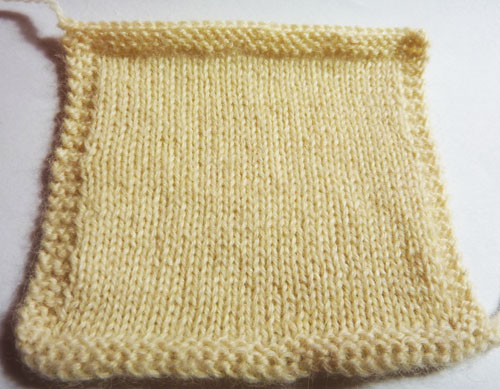 Washing it actually changed the feel of fabric quite a lot. The wool bloomed and didn’t form a ‘halo’ so much as a ‘protective mesh’. I suppose this is down to the long fibres again. The fabric stayed soft, but took on a faintly steely quality.  As you can see the washing also did nothing to reduce the silky sheen or the crisp stitch definition.

Now I like to put my yarns through a stress test as well and this is where Excelana showed it’s more interesting qualities. You can stretch this stuff to hell and back! I hung 400g (a full jumper’s worth of wool) off the square overnight and it snapped back to it’s original gauge with a quick shake. I’ve distorted it every whichway and have nothing to show for it.

The stretchiness is part of what makes it ‘vintage’. Most older patterns rely on negative ease to shape jumpers – think the clingy sweaters of the 50s – so of course you would need a wool that holds it’s shape.

I tested for pilling as well.  Excelana does not pill easily, but the surface fuzz did start to roll up after a judicious application of friction. The stitches themselves however, remained untouched. So, nothing you couldn’t fix with a razor.

Excelana, in conclusion, is soft and delicate with an iron constitution. As well as vintage jumpers I think this would be great for winter gloves. I’m quite certain anything you made with it would last and last, in the true spirit of bygone days when that’s what clothes were supposed to do.

I should note here that I also own some Excelana in ‘Ruby Red’; the dyeing process produces a slightly harsher wool. It’s still perfectly nice mind you, but the difference is there.

Of course, I got two samples in the post so look out for the second yarn review soon!