Yikes, I haven’t posted on here for a while. It’s not that I haven’t been knitting diligently, but none of it is very bloggable at the moment.

This week though, I have been playing with a new technique: the Knotted Steek. What is this crazy steek? It’s when you leave trailing ends at the breaks in your fair isle knitting and secure those ends by knotting pairs of them together. There are some better descriptions in this blog post and this excerpt from Principles of Knitting.

What interests me is how unbulky and simple this steek is. I’m rather familiar with the crocheted steek but it’s not suitable for everything. Knotted steeks though…they seemed at first glance like they would work on plain knitting. Naturally I tested that hypothesis with the discipline and rigor of a professional science-person. Nothing says “crafts!” quite like empirical evidence, don’t you think?

Above you can see my test subject, an old swatch I have lying around from a previous yarn review. I have unpicked the cast-off row and re-knit it so that 6 stitches are still live and unsecured. Once the needle is removed, they can be unravelled all the way down the swatch and those loose strands will be knotted. 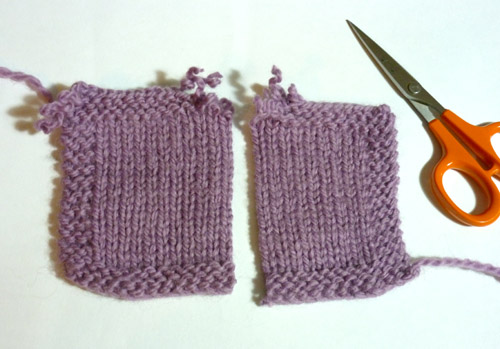 Snip! The first thing to do was knot the cast-off row strands properly so that no other stitches on that row would unravel. You may notice that I have cut straight between two columns of knitting for neatness.

I then picked out pairs of ends at a time and tied them in a basic overhand knot, held together as one strand. There is a bit of a problem with unravelling washed and blocked knitting – the “ramen noodle” effect. 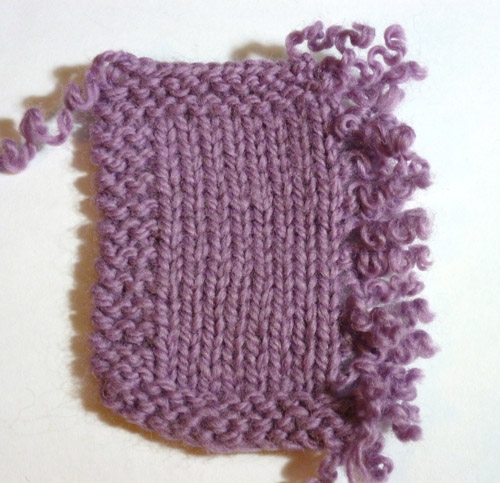 It isn’t neat, but it’s knotted! 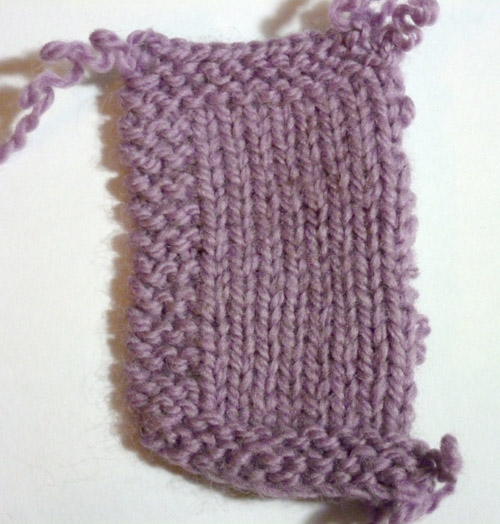 Tucking all the ends out of the way shows a lovely neat edge though. I’d be happy picking up a buttonband or sewing another piece onto that edge. It’s sturdy. It holds! Pulling it about doesn’t do much!

Conclusion: Although it produces a ton of ends to be dealt with, I think I like it. I have a real need for plain cardigans at the moment, and I like the idea of be able to churn out a tube of knitting I can cut and knot to my needs. Another technique, another string to the bow!

3 responses to “Knotted steeks anyone?”