You know what’s fun? Trying to take well-lit pictures on the shortest day of the year!

Well, that’s the last cardigan of 2012. I know I’ve not mentioned this one very much. It’s been sitting on the backburner since June, as rainy day knitting. Plus once I had the body done, the rest was just stockinette and two plain grey sleeves don’t seem worth posting about do they? 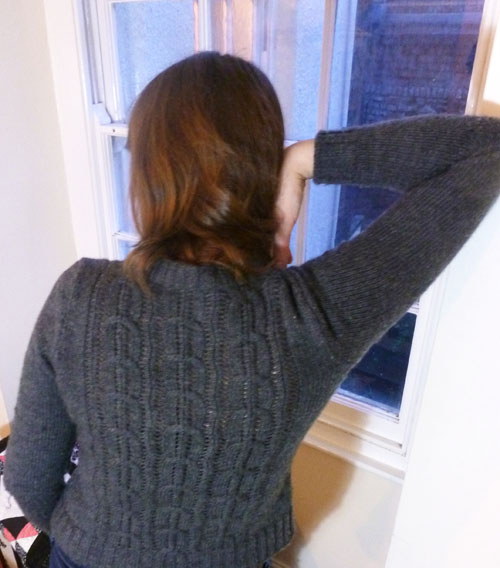 But hooray it’s done! I wish I’d finished it off sooner actually – it’s so warm and fluffy. I’ve even tried out a new kind of buttonhole on it: The ‘Tulips’ buttonhole.

This is a buttonhole construction method invented by TechKnitter. If you are at all familiar with her many construction tricks you will soon recognise it as an amalgamation of her sturdier cast-on/off methods. The result is symmetrical, sturdy and quite easy to memorise, despite there being a lot of steps. I heartily approve!

That pattern isn’t too shabby either! It’s the Acer Cardigan by Amy Christoffers. She’s one of these designers with such a strong asthetic, that if you like one of her patterns you will probably like about 90% of the rest. All her cardigans are snuggly yet classy. They are cardigans you wear while you lounge on a big squishy sofa, holding a hot chocolate (with whipped cream). I think next year I will try Pomme de pin…