You’ll be pleased to know that the yarn does in fact live up to its name. It’s very nice to handle and very drapey. That’s good because false advertising is an awful awful thing.

The swatch is knitted on 4mm needles. I know I went on about the importance of a garter stitch border in the last review but I’ve left it off on one edge so I can actually see how much rolling and stretching the yarn edge is subject to. I’ve not used a lot of cotton so its properties are a bit more of a mystery to me than all the animal fuzz I own. You can see it’s rolling a bit, but it’s not been blocked yet. 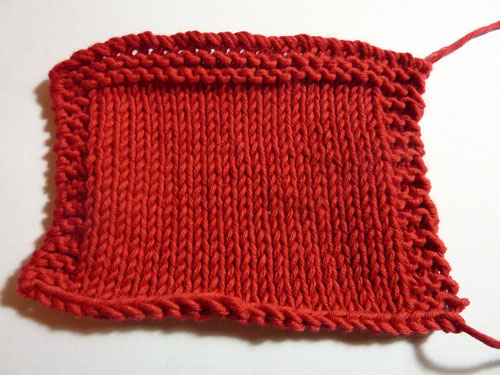 Knitting with it is pretty easy on standard plastic-coated metal needles. It’s a very loosely spun yarn so it requires blunt tips and a little bit of grip on the needles or you’re going to end up with stray loops of thread all over the place. I certainly wouldn’t go for anything rougher because it’s also a heavy yarn and that would be too much like hard work on the hands.

As a general rule, I will choose the needles that allow me to bust out the stockinette and still pay attention to some particularly tense televisual entertainment, like The Wire or early X-files (Oh Mulder! Can’t you see that getting too close to the truth only gets you punched in the face??).

But I digress. The yarn label states that it is machine washable at 40°C and it holds up well. Before washing the stitch gauge was 5.5 sts/7.25rws per inch. Then it stretched out to 5.7sts/8rws per inch…and after hanging the swatch up for a day, it sagged back to the pre-washing gauge. So I guess the lesson is, any horizontal blocking cancels out when you wear anything made from this?

So here is the swatch after getting good and busted up. It’s eeeeeeeever so slightly faded and it’s not rolling quite so much at the plain edge. Those loose ends got tatty quickly though, so I’ll be joining any ends with a decent Russian join.

Oh and here’s a closeup of the pilling…

I gave it a good ruffling and it wound up looking worn pretty quickly. I’m not sure how well the photos show this, but it seems like a yarn that isn’t going to stay pristine for long. Certainly not something to make clothes out of unless you aren’t bothered about stitch definition.

My verdict: Soft and casual-looking yarn that would be best for drapey clothing. Absolutely no point making anything hard-wearing like a bag out of this, but I am planning a nice T-shirt with it.